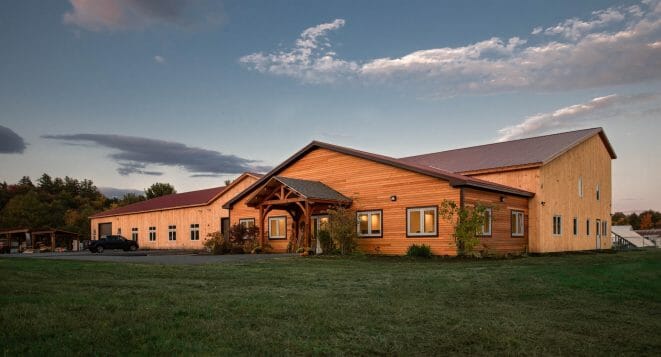 After the fire, Vermont Timber Works was happy to receive the support and well wishes of our local community.

After surveying the extensive damage, and weighing our options, we decided to rebuild. We quickly relocated to a temporary workspace and began to plan how we were going to rebuild Vermont Timber Works.

After the fire was put out and the site was declared safe for work to begin, what was left of the building was demolished, and the remnants were taken away.

Then the water pipes for the new sprinkler system were laid, as well as the underground wires for electricity.

The building was prefabricated by LaValley Building Supply.

Official construction began in February of 2020.

The pandemic slowed us down, but luckily we were able to keep working safely and get back to building.

The building was complete in September 2020, almost a year to the date of the fire.

It’s been a different and difficult year at Vermont Timber Works, but we’re happy to say that we made it through and that it was all worth it.

The fire at the Vermont Timber Works workshop and office.

Salvaging what we could from the destroyed office.

An exterior dumpster was burned in the fire.

Steel components were damaged in the fire.

A cabinet of stains that was in the fire.

The office interior was damaged by the fire.

The roof system being lifted by crane during the rebuild of Vermont Timber Works.

Getting Ready to Lift the Trusses

Beams being added during winter construction.

Walls going up during winter construction.

Even before the siding was put on, the timber framed entry way made our new building look impressive.

To mark the occasion of moving into our new building, VTW held a small ribbon-cutting ceremony with only our staff and a local news crew. We hope to have a larger celebration with the community once the pandemic allows us to gather again.

VTW Ready To Move In

Our new building is very similair to our original building, however our new building features a more efficient design and layout as well as more storage and workspace.

Vermont Timber Works would like to thank everyone who helped us after the fire. This includes members of our community, local businesses, the local government.